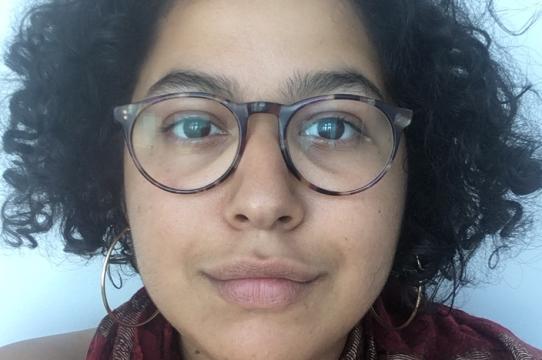 Graduate Student, PhD Program
Through her research, Yasmine Benabdallah explores questions of decolonial filmmaking, in particular in the context of Moroccan, North African, and Arab cinema. She approaches this question through work with archive, memory, language, indigenous epistemologies, and collaborative practices. Yasmine’s writing has been published in art and research magazine klima, in the Berwick Film and Media Arts Festival 2020 catalogue, in Middle East Eye, and in HuffPost Maghreb. She has taken part in interdisciplinary panels and conversations for different institutions such as the Columbia University Global Center in Paris, Africa in Motion (AiM) Film Festival, and Berwick Film & Media Arts Festival.
Email:
ybenabda@ucsc.edu
http://www.yasminebenabdallah.com
Biography:
Born and raised in Morocco, Yasmine Benabdallah studied film and mathematics at Columbia University, before studying Political Arts at Sciences Po Paris. After directing “The Travel Curiosity” on her father’s love for travelling, she made “Ojalá: la vuelta al origen”, a documentary on the dance of the Palestinian diaspora in Chile. Yasmine has since developed an installation on finding Chile in Palestine, and is now working on “Moussem Trans(e)”, a film on a Moroccan pilgrimage between religion, sorcery, and trans identities. Through filmmaking, visual art, and writing, Yasmine explores stories around memory, identity, dance, heritage, diaspora, borders, archive, and rituals. Her work has been shown in Morocco, France, Egypt, the US, and Palestine, in addition to residencies in Palestine, Morocco, France, and Tunisia where her upcoming film “Chebba” won the Cinephilia Best Screenplay Award.