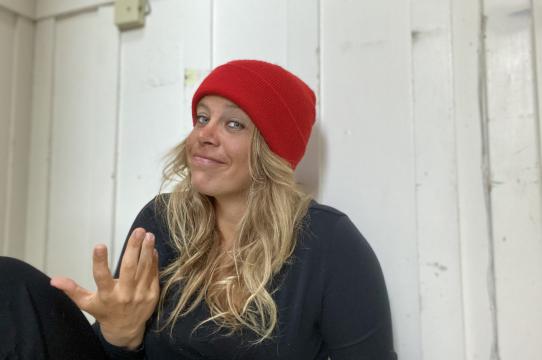 M.F.A. Student – Class of 2021
Art and social change; Activism; Gender roles in Islam; Muslim women surfers
Email:
sarrobis@ucsc.edu
Biography:
Samantha Robison grew up in the suburbs of Washington DC. She earned her bachelor's degree in Art and Politics from Lewis and Clark College in Portland, Oregon. After completing her undergraduate studies, she moved overseas and founded aptART (Awareness & Prevention Through Art). AptART is an organization of creatives working with youth and their communities across the globe. Through collaborative large scale public art, the organization shares creative outlets and amplifies voices of marginalized groups. Since 2010 artist and activists have worked with communities to paint public walls, implement workshops and install exhibitions. Her work has taken her to Iraq, Jordan, Syria, Turkey, Palestine, Tunisia, Myanmar, Mozambique, Kenya, The Democratic Republic of Congo, Belgium, France, Germany, The United Kingdom and The United States. She has works alongside a variety of agencies ranging from US, UK and European governments to the United Nations. She also works with private donors to secure funding for projects. She was given the alumni of the year award from Lewis and Clark College in 2016 and awarded the University and College Designer Associations (UCDA) Krider Prize for Creativity in 2017. When Samantha is not managing projects, she lives in Inhambane, Mozambique. Her research interests include gender roles in Islam and women in predominantly Muslim communities who surf. She has particular interest in case studies in communities of Bangladesh, Gaza, Indonesia, Iran, Morocco and Senegal. She is particularly interested in Surf photography and the intersection of light and water.