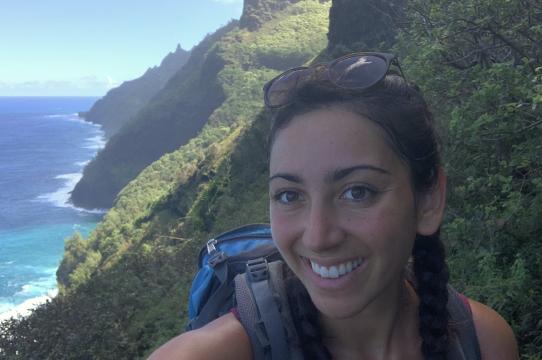 MFA Candidate
Research Interests: Cuban culture and performance; Latin America and the Caribbean; US imperialism and interventionism; immigrant identity and integration; education equity; data visualization; community arts and artivism
Email:
mieghaff@ucsc.edu
Biography:
Originally from Colorado, Mitra has studied and worked in Spain, Cuba, Brazil, Costa Rica and California. Documentary media has served as her most valuable means of analysis and synthesis, community building and creative expression. At Colorado College, she petitioned her own interdisciplinary undergraduate degree, Intercultural Communication, for which she developed a cultural and social studies framework as the foundation for practical applications in narrative writing, photography and documentary film. Throughout her international experiences, she has explored creating multimedia pieces to represent social resilience and enrich intercultural understanding. She studied multimedia communication in Salvador da Bahia for six months, followed by an internship with the US Olympic Committee during the Rio 2016 Games. Onsite in Rio de Janeiro, she worked as the main interpreter between US and Brazilian staff at the US training center, serving as the point-person for cross-cultural communication and facilities management. Mitra then worked as the assistant curator of the contemporary Brazilian art exhibit Raízes/Roots at the Colorado Springs Fine Arts Center, exploring contemporary Brazilian art that addressed issues of colonialism, race, gender and sexuality, spirituality and globalization. During her year of study at the University of Havana, she supported the development of a community initiative Proyecto Akokán and facilitated the project’s first youth art workshops. She returned the following summer, as the recipient of the Davis Projects for Peace grant, to further coordinate the development of community spaces and arts education programming. In addition to various other production and media roles, Mitra currently works as an editor and translator for Cuba’s Prensa Latina News Agency and the program assistant of CC Mobile Arts, developing and coordinating accessible arts programming in Colorado. She is pursuing an MFA to work as a multimedia artist, activist and educator, hopeful to facilitate collaborative documentary production, empower community efforts and influence public policy at the intersection of the three.