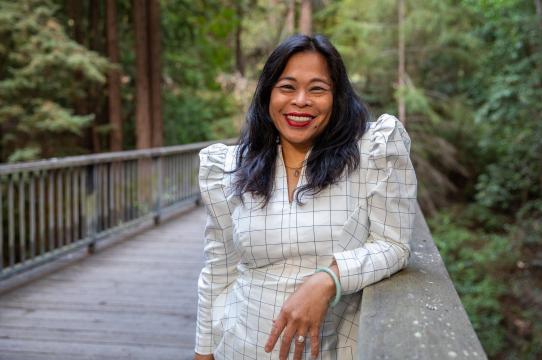 Celine Parreñas Shimizu, film scholar and filmmaker, is Dean of the Division of Arts at the University of California at Santa Cruz. She is formerly Professor and Director of the School of Cinema at San Francisco State University and Professor of Asian American, Feminist and Film and Media Studies at UC Santa Barbara where she was Chair of the Senior Women’s Council. She was also a Visiting Professor in Film and Digital Media at UCSC in 2013.

The Celine Archive (2020), her latest film, won several festival awards and is distributed by Women Make Movies. She is currently working on her new film 80 Years Later: On Japanese American Racial Inheritance.

She has served as a reviewer for the Ford Foundation and the National Endowment for the Humanities. Her numerous peer-reviewed articles appear in top journals in the fields of cinema, performance, ethnic, feminist, sexuality studies, and transnational popular culture in Asia and Asian America. She is formerly Associate Editor of Gay and Lesbian Quarterly (GLQ), founding USA editor of Asian Diasporas and Visual Cultures of the Americas and Associate Editor of Women Studies International Forum.

Her research and creative activity have received support from the Motion Picture Association of America, the Social Science Research Council, the James Pendleton Foundation, and the Edie and Lew Wasserman Fund.  She has additionally received fellowships from the United States Studies Centre at the University of Sydney and the Research Institute for Comparative Studies in Race and Ethnicity at Stanford.

She received her Ph.D. in Modern Thought and Literature from Stanford University, her M.F.A. in Film Directing and Production from UCLA School of Theater, Film and Television and her B.A. in Ethnic Studies from U.C. Berkeley.

Dean Shimizu intends to cultivate cultures of compassion to enable community and creativity to take us to the next iteration of arts at UCSC. To read more, please see: