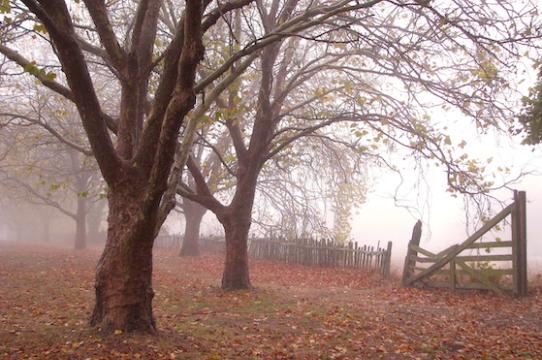 The Film and Digital Media PhD Program is proud to present its newest graduate, Karl Mendonca. Karl's dissertation, "Programming the Intermission: A Procedural History of Cinema and Computation," was accepted by Professor Warren Sack, dissertation chair, and committee members Professor Anjali Arondekar (UCSC Feminist Studies), and Professor Kavita Philip (University of British Columbia, Department of English Language and Literatures).  Associate Professor Jenny Horne generously served as moderator.  Karl's dissertation takes up, as he puts it, “the unfinished business of the intermission” – a feature of theatrical film exhibition almost completely neglected by film theory and film exhibition history.  In his dissertation, Mendonca explores the instance of a single South Asian company's control over the intermission breaks in theatrical film programming beginning in the 1960s and dominating into the 1980s until its unpredictable entry into a delivery and courier system.

Current student Isabelle Carbonell has accepted a tenure-track position at the American University of Paris.

Raed Rafei's video essay "Queer Utopia: From Stonewall to Tell Garden" was published in the peer-reviewed journal Kohl: a Journal for Body and Gender Research [ كحل: مجلة لأبحاث الجسد و الجندر ]. The video essay and text were first developed in Anna Friz's 200C and are part of the project component of Raed's dissertation.

Abram Stern was collaborator and had a project in an exhibition at the ICA at Maine College of Art & Design. The show closed recently, but the catalog is available online and in print.

The peer-reviewed Passage journal has published a paper by Marilia Kaisar. It was published on September 16 and it is based off of a paper she worked on as part of UCSC coursework.

The feminist journal Mai: Feminism and Visual Culture published a peer-reviewed essay by Yasmine Benabdallah on the groundbreaking Tunisian film Fatma 75. Yasmine's essay was written before she even arrived in the program and is part of a special issue on Feminist Craft.

Catching up from last summer, current student Darren Wallace presented two films. When is Philadelphia was completed within a core course and screens online as a part of Scribe Video Center's Radical Remedies call for works. His film Cinema as Ritual was completed within the Technoshamanism course led by Ed Shanken and was part of the Detroit Narrative Agency's Ethics and Aesthetics call for works.

Lalu Özban has been selected as a Graduate Mentorship Fellow in the GANAS Graduate Pathways Program designed to increase grad school opportunities for Latinx students, students of color, and low-income students.

Amy Reid was selected as a Graduate Pedagogy Fellow at the Center for Innovations in Teaching and Learning where she will learn about equity-minded, antiracist, acessibility-aware pedagogies.

YoungEun Kim shares the news that a newly commissioned work, <Reference Voice>, was exhibited at Nam-Seoul Museum of Art, Seoul. Her work, <Guns and Flowers: Sculpted two love songs #19> has been acquired by Jeju Museum of Contemporary Art in Korea and is currently on view at the museum as part of their new acquisition exhibition. Her work has also been included in the publication, Korean Art 1900-2020 (2021), which is an overview of 120 years of Korean modern and contemporary art history. This book was published by The National Museum of Modern and Contemporary Art in Korea.

Last but certainly not least, Dorothy R. Santos was profiled as part of the Student Success Initiative on campus.