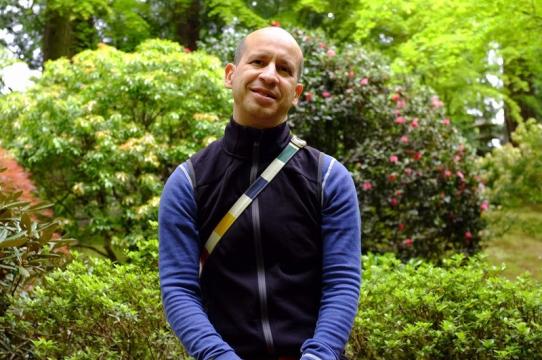 The Department of Film and Digital Media is deeply shocked and saddened by the loss of our colleague,  Professor Jonathan Kahana, after a protracted battle with a rare form of cancer. Jonathan passed away on December 31, 2019 at the age of just 53. Professor Kahana joined the faculty at UC Santa Cruz in 2012 after spending several years at New York University; before that he taught at Bryn Mawr College after receiving his PhD from Rutgers University. His arrival at UCSC came shortly after the launch of our PhD program in the critical practice of film and digital media, a program on which he has had a profound and lasting effect. He was an accomplished scholar, teacher, and public intellectual, and we are bereft at the huge gap he leaves in our intellectual and personal lives and in the life of our department.

Professor Kahana was the author of Intelligence Work: The Politics of American Documentary (2008) and the editor of The Documentary Film Reader: History, Theory, Criticism  (2016).  The publication of Intelligence Work decisively established Professor Kahana as one of the most significant and innovative scholars in the field of US documentary film. The book examined a range of documentary modes, from capital-intensive, widely-circulated works of state propaganda and mainstream film and television to the ephemeral, hand-made productions of radicals, artists, and amateurs. Kahana argued that all can be said to perform, in one way or another, “a similar intelligence work, by making visible the invisible or ‘phantom’ realities that shape the experience of the ordinary Americans in whose name power is exercised and contested.” The book staged a vital dialogue between the fields of cinema and media studies and critical theory, grappling with enduring questions about the place and form of intellectual work and what constitutes public-ness.

Kahana’s edited volume The Documentary Film Reader: History, Theory, Criticism continued his contributions to documentary and its role in public life and is, by any measure, a monumental achievement. Clocking in at over 1000 pages, the collection assembles both primary and secondary texts including essays, reviews, interviews, manifestos, letters, and ephemera from a huge range of sources. Professor Kahana not only rescued hard-to-find writings out of historical oblivion, but also shone a light on non-Euro-American writings and writings on avant-garde documentary practices, thereby powerfully reshuffling the field of documentary studies. In his general introduction, and in introducing each of the book’s seven sections, Professor Kahana situated his curated texts in their historical context and provided interpretive introductions that offer ways for readers to reflect on the history and evolution of documentary forms over the past hundred years. But this extraordinary collection was never intended just for critics or scholars: noted Canadian filmmaker John Greyson wrote a back-cover blurb for Kahana’s Documentary Film Reader that rhapsodised on the work and concluded, “Every aspiring filmmaker should keep a copy in her backpack.”

The recognition of Professor Kahana’s influence on students, scholars, and filmmakers alike is well noted. In his scholarship in and beyond these two books, Professor Kahana often formed deep intellectual dialogues with filmmakers and artists. His collaboration with multimedia artist Zoe Beloff led to two publications, an interview on Beloff’s staging of Brecht’s play The Days of the Commune and a small booklet with a dialogue on media activism in the contemporary moment. He published a conversation with filmmaker Liza Johnson on her film South of Ten and, with his partner Jennifer Horne, conducted an influential interview with famed documentary makers Harun Farocki and Jill Godmillow. Professor Kahana often brought filmmakers into dialogue with our students, too: UCSC’s Center for Documentary Arts and Research (CDAR), which he founded, fostered many enlightening exchanges between students, faculty, and artists. A regular at the annual Visible Evidence international documentary conferences, Professor Kahana directed the 2011 Visible Evidence conference in New York City, the year before he began teaching at UCSC. With three hundred participants present from twenty-five countries and a program of screenings, workshops, keynote talks and performances, and social events, Kahana was in his element, fostering debates, dialogues, and dinners.

Professor Kahana had a profound impact on the work of many of our graduate students, teaching core courses in the PhD and MFA, as well as seminars on issues related to documentary. Here, he often connected his research to his seminars: for example, he offered a seminar on the documentary interview and another on the topic of re-enactment, the subject of the book he was working on at the time of his death. Even with his undergraduate courses, he managed to bring research questions to bear on our core curriculum, modeling for students the way to ask the most fundamental questions, including: “what is documentary?” His syllabi--undergraduate and graduate alike--show that he was never content to settle on teaching or investigating a topic; his skill was to model and enable modes of thinking, investigation, and scholarship. He advised a great many students in our programs, and his former advisees have gone on to tenure-track positions as professors while also earning international awards for their visual work. Even after moving to UCSC, he continued to chair the dissertations of former students at NYU, one of whom won the Society for Cinema and Media Studies Dissertation Award, the top dissertation prize in our field.

As his colleague, we saw these intellectual and pedagogical tendencies regularly in our interactions with him. Just as his scholarly writing is characterized by profound critical engagement and careful deliberation--the ability to enact what his friend and former colleague, Dana Polan, has termed “deep reflection and productive illumination”--so too were his contributions to the life of the university. Never content to stop at the easy answer, Kahana would often pose the tough questions that many of us were too scared or reluctant to ask, sometimes in elaborate, perfect prose in lengthy, witty email messages that raised the bar on what that medium can do as a form; as other friends have pointed out in reflections after his death, one always had to bring one’s best game when corresponding with Jonathan. In such exchanges, Kahana exhibited a generosity of spirit and commitment to intellectual life both within the university and in its relations with diverse publics, which he often reached with his work.

For those of us lucky enough to enjoy Professor Kahana in social life beyond the department, we also mourn an emigré Canadian, new citizen, lover of cats, aficionado of good tea, swimmer, cyclist, fashionista, foodie, and sports fan. We also remember him as the devoted partner of our colleague, Professor Jennifer Horne, who asks that we consider donations in his memory to fund research on ALK+, the rare cancer that he fought since 2017. https://www.supportalcf.org/alk/researchforjonathan

We hope to organize a memorial event in the department in the future and will post details when we can.