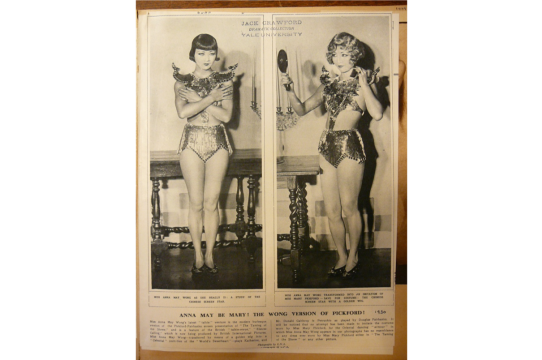 Topic: "Regarding Anna May Wong: An 'Oriental Flapper's' Transnational Stardom"

Anna May Wong (1905-1961), the most well-known pioneering Chinese-American screen-stage-television performer, forged a four-decade long career from 1919 to 1960. My presentation will focus on her transnational shuttling between the US and the interwar Europe, Australia as well as China. I argue that her transnational movements made her a glamorous and exotic cosmopolitan who significantly also doubled as a migrant performer-worker who ventured into various media formats while navigating precarious work conditions (due to race-gender-class and other socio-political inequities) for better work opportunities. I analyze the ways in which she “greeted” her international public through acting, giving interviews, letter-writing, photo-gifting, anti-Fascist activism and other activities. From her interstitial position that defied any essentialist categorization, working at time prior to the formation of the hyphenated Asian-American identity politics, she developed double-entendre signature performances that subverted gender-race stereotypes and enabled her to foster a political and critical consciousness in her international audiences both in her times and in the 21st-c. Studying Wong as an exemplary case, my presentation addresses the broader question of how to (re)write feminist media histories.

Yiman Wang obtained her PhD degree from Duke University (the Graduate Program in Literature).  She is Associate Professor of Film & Digital Media at University of California, Santa Cruz. She is the author of Remaking Chinese Cinema: Through the Prism of Shanghai, Hong Kong and Hollywood (Honolulu, HI: University of Hawaii Press, 2013).  She is currently writing a book on Anna May Wong, the best known early 20th-c. Chinese-American screen-stage performer.