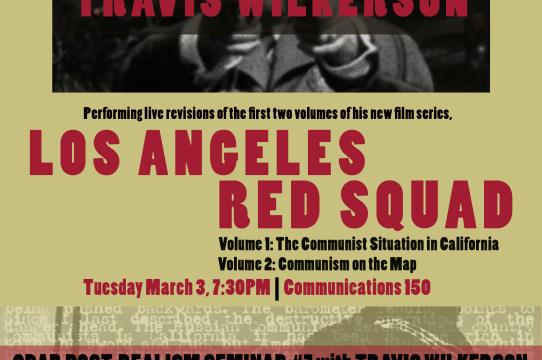 Premiering at the International Film Festival of Marseilles, Los Angeles Red Squad seeks to trace the early activities of the Red Squad section of the Los Angeles municipal police, under the zealous tutelage of its figurehead in the 1920’s and 30’s, William “Red” Hynes. Hynes’ mission? To track down, flush out and threaten communist activists. Combining sketches of today’s struggle and those of yesteryear with a detailed summary of repression which runs throughout the films, a veil covering the images of the present, Wilkerson creates a superimposition that is as metaphorical as it is real.

The seminar will both continue the discussion of LOS ANGELES RED SQUAD, and engage with the work of the seminal East German documentary filmmaking team Heynowski & Scheumann.

This seminar is open to all, but space is limited. To reserve a place in the seminar please contact Alex Johnston (alwjohns@ucsc.edu) by Monday, March 2: please send the message with “Wilkerson Seminar” in the subject line.

Travis Wilkerson makes films in the tradition of the "third cinema," wedding politics to form in an indivisible manner. His films have screened at scores of venues and festivals worldwide, including Sundance, Toronto, Locarno, Rotterdam, Vienna, Yamagata, the FID Marseille and the Musée du Louvre. His best-known work is an agit-prop essay on the lynching of Wobbly Frank Little called "An Injury to One," named one of the best avant-garde films of the decade by Film Comment. In 2007, he presented the first ever performance art at the Sundance Film Festival with Proving Ground, a live multi-media rumination on the history of bombing described as “one of the most daring experiments in the history of Sundance.” His writings on film have appeared in Cineaste, Kino!, and Senses of Cinema. He has taught filmmaking at the University of Colorado and Film Directing at CalArts. Presently, he is the inaugural Visiting Fellow of Media Praxis in the Pomona College Media Guild. He is also the founding Editor of Now: A Journal of Urgent Praxis.