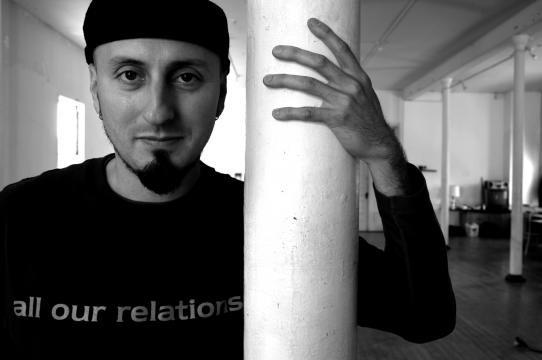 John Jota Leaños is a Mestizo (Xicano-Italian-Chumash) interdisciplinary artist and animator concerned with the embattled terrains of history and memory as they relate to nation, power, and decolonization. A Professor of Film and Digital Media at UCSC, Leaños teaches courses on Chicanx and Indigenous cinema/media, sci-fi & speculative fictions, documentary animation, documentary video, street art, and new media. His practice includes a range of film, animation, public art, installation, new media, and performance focusing on the convergence of memory, social space, and decolonization. Central to Leaños' art practice and cultural work lies the investigation of the documentary as a transformative discursive system where subaltern histories, untold stories, and decolonial perspectives arise in fictional and non-fictional forms. His research explores the slippery slope of the documentary within the discursive spaces of the public sphere, media outlets, the virtual sphere, the museum, and the gallery.

Leaños is a Creative Capital Foundation Grantee and has been an artist in residence at the University of California, Santa Barbara in the Center for Chicano Studies, Carnegie Mellon University in the Center for Arts in Society, and the Headlands Center for the Arts.  Leaños was an Assistant Professor of Chicana/o Studies at Arizona State University from 2003-2007 and an Assistant Professor of Social Practices and Community Arts at the California College of the Arts from 2007-2009.  His recent projects have been funded by the Creative Capital Foundation Grant, the MAP Fund, the Creative Work Fund Award, and the Irvine Creative Connections Grant.

"Public Pedagogy and Cæsura" in Handbook of Public Pedagogy: Education and Learning Beyond. Edited by Jennifer A. Sandlin, Brian D. Schultz and Jake Burdick.  Routledge, 2010.

"Dead Conversations on Art and Politics" in Filming Difference: Actors, Directors, Producers and Writers on Gender, Race and Sexuality in Film. Edited by Daniel Bernardi. University of Texas, 2009.

"Art Education in the Age of NeoConvervatism" in Knowledge and Power in the Global Economy: The Effects of School Reform in a Neoliberal/Neoconservative Age.  Co-written with Anthony J. Villareal. Editor David Gabbard.  Lawrence Erlbaum, 2007.