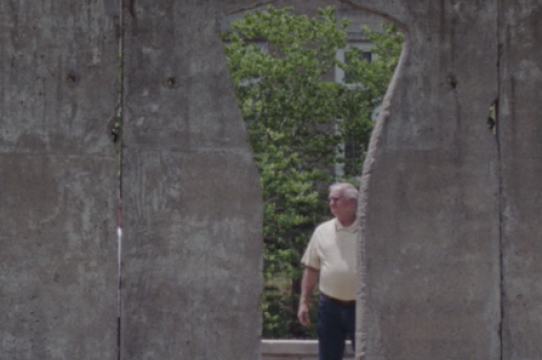 Preview Screening of "The American Sector" with filmmaker Courtney Stephens

The American Sector (2020, 67min.) is a timely feature documentary that documents large panels of the Berlin Wall (30 years after its fall) around America, visiting sites where remnants have been installed as monuments—but to what? The film traverses the country, stopping at over seventy-five locations that have the Wall on display, such as the CIA, the college in Missouri where Churchill gave the "iron curtain" speech, and a Ripley's Believe It Or Not! Across from the Alamo. The film captures the ways that Americans have transformed this decommissioned East German border wall into a decidedly American monument, touching on deeper ideas of bondage and freedom, and shows how citizens work, in their own small ways, to push the country towards embodying its own ideals. The American Sector will have its international premiere screening at the upcoming 2020 Berlinale and is being shown as a preview /work-in-progress screening.

Courtney Stephens is a filmmaker and programmer based in Los Angeles. Her non-fiction and experimental films have appeared at NYF, SXSW, Hong Kong IF, Dhaka IF, Mumbai IF, San Francisco IF, The Exploratorium, DokuFest, Onion City, Orphans Film Symposium, Crossroads, and elsewhere. She co-founded the Highland Park microcinema Veggie Cloud, and has curated programs at institutions including the Museum of the Moving Image, the J Paul Getty Museum, Union Docs, and Flaherty NYC.  She attended the American Film Institute, and has received fellowships to Yaddo and MacDowell, a Fulbright scholarship to India, and lectured on subjects related to female travel and film at the Royal Geographical Society and elsewhere.