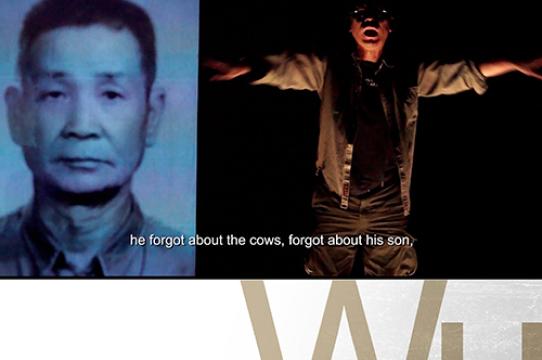 Wu Wenguang is a foundational figure of Chinese independent documentary film and co-founder of the Caochangdi Workstation in Beijing. In 2010, Wu launched the multidisciplinary and collaborative Folk Memory Project to document the gathering of oral histories from the rural survivors of China’s Great Famine (1958-1961). In the past six years, the project participants have interviewed 1,220 villagers in 246 villages spread across 20 provinces.

Wu and three of his collaborators will be on campus for two public events: a night of film screenings followed by a Q&A with the directors, and a hybrid media performance, Reading Hunger, that combines theater, documentary and oral history. They will also hold a CDAR (Center for Documentary Arts and Research) seminar for in-depth discussion with faculty, graduate students and advanced undergraduates at UCSC and other Bay Area universities.

Wu Wenguang is commonly recognized as the founder of Chinese independent documentary, also known as China’s New Documentary Movement. He is a Beijing-based independent documentary maker, freelance writer, creator and producer of dance and theater since 1988. Wu’s documentaries include Bumming in Beijing (1990), 1966, My Time in the Red Guards (1993), Jiang Hu: Life on the Road (1999), Fuck Cinema (2005), Treating (2010), and Investigating My Father (2016). In 2005, Wu co-founded the independent art space Caochangdi (CCD) Workstation with a dancer and choreographer, Wen Hui, in Beijing. The Caochangdi Workstation has fostered two major ongoing collaborative documentary-theater-oral history projects: The Village Documentary Project, and The Folk Memory Project of China’s Great Famine (1958-1961).

Liu Xiaolei has been a participant in The Folk Memory Project since 2014 and directed the documentary A True Believer (2015). Liu graduated in TV editing and directing from Liaoning University, and has since worked at DDATV, founded a culture and media company, and then engaged in producing advertisement, documentaries, and feature films as a freelancer.

Zhang Ping is a writer, painter and filmmaker, and has been a participant in The Folk Memory Project since 2013. Zhang completed her first documentary, No Land, in 2015.

This event is generously sponsored by The Institute of Arts and Sciences, Porter College, The Center for Documentary Arts and Research, Film and Digital Media, and Cowell College.