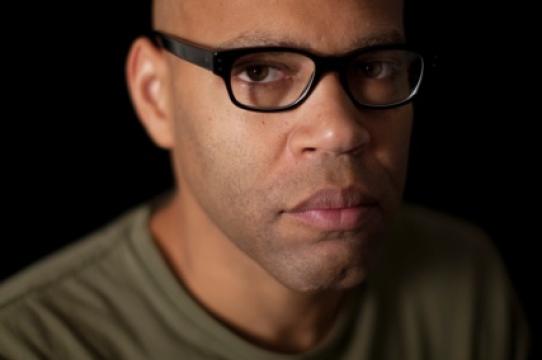 Screening of "Erie" (85 mins., 2010) and Q&A with artist.  Sponsored by Porter College, Film & Digital Media, the Arts Dean's Fund for Excellence, and the Center for Documentary Arts and Research.  Free and Open to the Public.

Erie consists of entrancing single-take, 16mm black-and-white sequences filmed in and around the communities surrounding Lake Erie.  Scenes explore African American migration from the South to the North, contemporary conditions, everyday tasks and labors, theater, and famous art objects.  Erie has been described as "a revelation... full of images of pure poetry" on Turner Classic Movies' blog and has been seen and honored at film festival awards around the world.

Ohio native Kevin Jerome Everson, who has made six feature films and over ninety shorts, is one of the most prolific and remarkable independent filmmakers working today.  His work has been exhibited internationally at festivals, museums, cinemas and galleries, including the 2008 and 2012 Whitney Biennials.  A solo exhibition of his short films, More Than That: The films of Kevin Jerome Everson was held at the Whitney in 2011.  He has been the subject of career retrospectives at the Centre Pompidou, Paris and Visions du Reel, Nyon.  He is the recepient of the 2012 Alpert Award in the Arts for Film/Video.

With a sense of place and historical research, Kevin Jerome Everson's films combine scripted and documentary moments with rich elements of formalism. The subject matter is the gestures or tasks caused by certain conditions in the lives of working class African Americans and other people of African descent. The conditions are usually physical, social-economic circumstances or weather. Instead of standard realism he favors a strategy that abstracts everyday actions and statements into theatrical gestures, in which archival footage is re-edited or re-staged, real people perform fictional scenarios based on their own lives and historical observations intermesh with contemporary narratives.  The films suggest the relentlessness of everyday life—along with its beauty—but also present oblique metaphors for art-making.