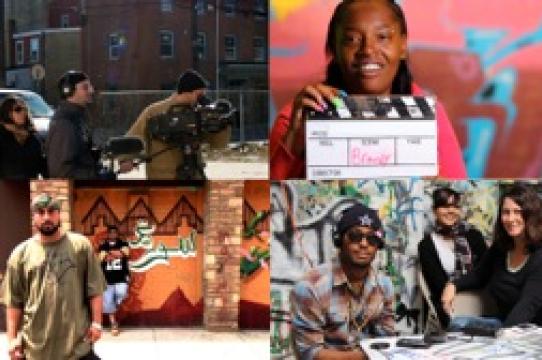 Title: The Two-Way Mirror: Evolvoing Social Documentary Practices in the Era of Selfies and Surveillance

In a furiously changing media landscape where almost anybody can be a producer and almost nobody can afford to be careless about personal privacy, social documentary filmmakers need to explore and understand the increasingly sophisticated ways in which marginalized and criminalized communities consume, experience, and produce media. How do diverse communities manage their own self-representation and communication, and how can outside storytellers most effectively work with these practices in their own social documentary projects?

Jennifer Maytorena Taylor is an award-winning documentary filmmaker with almost two decades of professional experience. She is currently in post-production on Daisy and Max, a verité feature for Al Jazeera America about a young family of Mexican American gang interventionists. Her latest project Street Knowledge 2 College – a 15-part series of short films produced collaboratively with youth trying to escape the “school to jail track” in South Los Angeles – recently launched on PBS.org. Taylor will discuss and show excerpts of recent and in-progress works in which she experiments with a variety of production approaches to build powerful stories about, and sometimes with, people in groups and communities labeled “criminal.”

Her feature film New Muslim Cool was the Opening Night program in the 2009 season of the independent documentary series P.O.V. on PBS and was exhibited in festivals, theaters, museums and broadcast venues around the world, garnering multiple awards. Other credits include Paulina, which premiered at Sundance and has been widely incorporated into curricula; the Emmy-winning Home Front; Special Circumstances for the PBS series Voces; Immigration Calculations; Ramadan Primetime; and numerous short films and television segments. Taylor’s work has been exhibited in venues such as the Sundance and Locarno Film Festivals, International Documentary Festival Amsterdam, Whitney Museum, and New York Museum of Modern Art. She has received supported from funders such as the Ford and Nathan Cummings Foundations, NEA, and Sundance Documentary Fund. She has been a fellow at the Sundance Institute, Banff Centre for the Arts, and the University of Southern California’s Annenberg School. She holds a Master’s from USC Annenberg in Specialized Journalism and is a Visiting Lecturer in Social Documentation and the Film and Digital Media Department at UC Santa Cruz.

Presented by the Film & Digital Media Department and the Arts Division

For more information or to accommodate a disability, please contact the Film & Digital Media Dept: 459-3204 / film@ucsc.edu