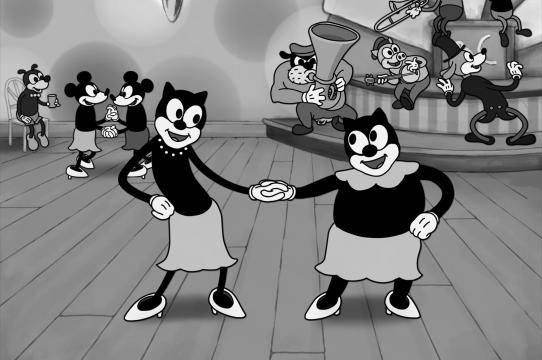 The period of Hollywood known as the “Code” years involved an intentional crafting of how we were to see and understand American values through film. Racism and prejudice were rampant, and were understood as necessary to safely delineating “us” from “them.”  The power of representation was held by a few, and effectively determined how these Others were shown to the world at large. The role of the homosexual, gay and lesbian, was strongly censored in an effort to underscore them as sick, deviant and pathetically comic.

Today’s talk focuses primarily on what Pepi has undertaken as the research and creation of a revisionist history document with the goal to re-place a positive presence of the homosexual, the queer, into the traditional American Hollywood animation from the 1930’s. The resulting cartoon, “Happy & Gay” is an original cartoon manifested as a document that should have existed, but couldn’t based on the time and attitudes it represents.

Lorelei Pepi is an animation artist and Critic at Rhode Island School of Design in the Film-Animation-Video Department.  Her animation films cover issues of the body, nostalgia, representation and document. Her works have traveled internationally, garnering festival prizes and recognition in such festivals as Rotterdam, Nouveau Images, Sundance, and Ann Arbor. Her work exists in the collections such as the Canadian National Film Archives, UCLA Film Archives, and the Sundance Institute Collections.

Presented by the Film & Digital Media Department and the Arts Division.

For more information or to accommodate a disability, please contact the Film & Digital Media Dept: 459-3204 / film@ucsc.edu