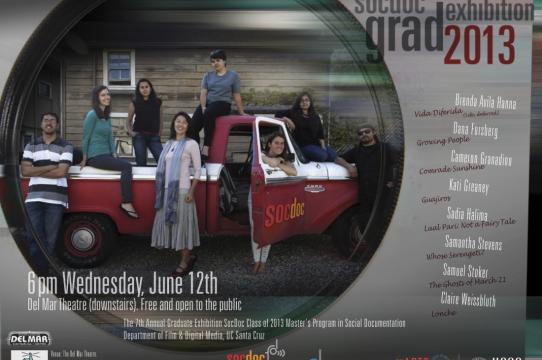 This event is free and open to the public.

Supported in part by the City of Santa Cruz and Nickelodeon Theatres, Inc.

Summaries of Docummentaries to be Screened:

Vanessa, a teenager born in Mexico, has lived in the United States with her family since she was six years old. Once an excelling middle-school student with big dreams of becoming a doctor, Vanessa begins to be haunted by her undocumented status as she reaches high school. Reconsidering her aspirations, Vanessa begins to give up on academics. Then, in the summer of 2012, Washington approves the "Deferred Action" policy that would grant Vanessa immunity from being deported for the next two years, allow her to get a job and to apply to college. Now what?

Three sisters – Miki, Uilani, and Sheila – reconnect to their heritage when they empower themselves and build community through their work at the MA`O Organic Farms in the community of Wai`anae in O`ahu, Hawai`i. Its groundbreaking youth leadership program combines a revival of precolonial Hawai`ian food practices with a path to a college degree. MA`O offers all three a way to escape from stereotypes of underachievement into an environmentally – and socially – sustainable future for their family and community.

Set in Baltimore, Comrade Sunshine focuses on the friendship between Dominique Stevenson, whose Friend of a Friend program helps men in prison through peer mentoring, and Wahid Shakur, a recently released 20-year-old now working with her to help build community. As she attempts to guide him in making a smooth transition back into society, Wahid faces the new challenge of life on parole. Dominique, meanwhile, continues to raise questions about the dire impacts of incarceration.

Two young Haitian agronomists, Ernst Jean Baptiste and Welbry Delince explore Cuba's world-renowned agricultural model.  After studying for five years at the Agrarian University of Havana, they set out on a tour of the island to interview a wide range of farmers about their practices. Traveling by horse, bus, and truck, they consider whether Cuban techniques of sustainable farming can be transplanted to the Haitian food system.

In the male-dominated political world of Bihar, India, Laal Pari has become a force to be reckoned with. Self-motivated and self-taught, this elected leader fights to change the playing field for women’s participation in politics at the grassroots level.  Even illiteracy didn't get in her way: Pari utilizes experiential knowledge to devise innovative and effective ways to combat the misogyny prevalent in her community. However, success has not come without obstacles: patriarchal bureaucracies and gender violence threaten to derail her accomplishments and blunt her victory.

A journey through Tanzania and Kenya becomes the occasion to explore a collision of agendas driving development, conservation, and globalization at the sites of a proposed highway through the Serengeti National Park. Despite strong opposition from the international community, the Tanzanian government pushes its plans for the road, in the name of economic development. Conservationists, safari guides, and Masai leaders all oppose the road. Rumors of Chinese involvement swirl, further heightening concerns over underlying motivations and environmental implications. This documentary investigates the meanings of the Serengeti, ultimately questioning who should get to decide its fate.

Sam Stoker, The Ghosts of March 21

This interrogation of a day in the life of Oakland, California, is focused on March 21, 2009, when a shoot-out between a young man named Lovell Mixon and members of the Oakland Police Department resulted in the death of Mixon himself and four Oakland police officers. Intimately following the day's events and situating them politically in the aftermath of the Oscar Grant murder, this documentary examination of an explosive event's underlying contradictions seeks to challenge the mainstream narrative of the shoot-out and to raise important questions about one of America's most salient institutions.

This tale of two taco trucks interweaves the narratives of J&S Catering, a traditional lunch truck roaming the fields of the Pájaro Valley, and Takoz Mod Mex, a gourmet food truck serving the high-tech companies of Silicon Valley. Following the restaurants-on-wheels on their daily routes, we witness the dedication and struggle that it takes to feed a hungry workforce in wildly different communities. Far more than a study of labor and lunch, Lonche offers an intimate look at family, migration, and sacrifice.