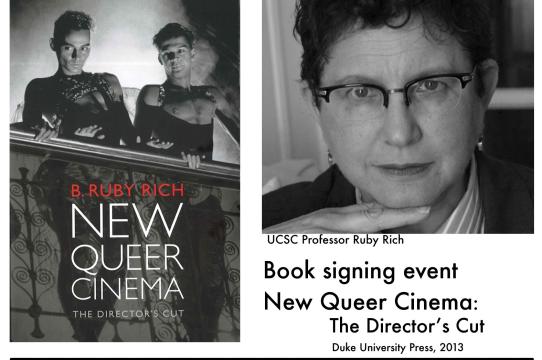 Please join us for a special reading of New Queer Cinema - The Director's Cut (Duke University Press, 2013) from author and Social Documentation Professor B. Ruby Rich.

B. Ruby Rich designated a brand new genre, the New Queer Cinema (NQC), in her groundbreaking article in the Village Voice in 1992.  This movement in film and video was intensely political and aesthetically innovative, made possible by the debut of the camcorder, and driven initially by outrage over the unchecked spread of AIDS.  The genre has grown to include an entire generation of queer artists, filmmakers, and activists.

As a critic, curator, journalist, and scholar, Rich has been inextricably linked to the New Queer Cinema from its inception.  This volume presents her new thoughts on the topic, as well as bringing together the best of her writing on the NQC.  She follows this cinematic movement from its origins in the mid-1980s all the way to the present in essays and articles directed at a range of audiences, from readers of academic journals to popular glossies and weekly newspapers.  She presents her insights into such NQC pioneers as Derek Jarman and Isaac Julien, and investigates such celebrated films as Go Fish, Brokeback Mountain, Itty Bitty Titty Committee, and Milk.  In addition to exploring less-known films and international cinemas (including Latin American and French films and videos), she documents the more recent incarnation of the NQC on screen, on the web, and in art galleries.

Rich will read selections from New Queer Cinema, followed by a book signing for participants.  Copies of New Queer Cinema will be available for purchase, courtesy of the Bay Tree Bookstore.