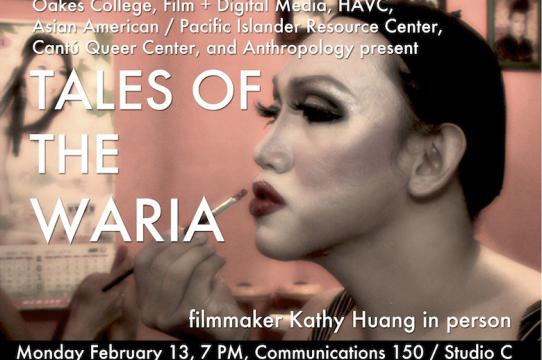 "Tales of the Waria"- Kathy Huang in person

Indonesia is home to the world's largest Muslim population.  It is also home to a community of transgender individuals known as warias, biological men who live openly as women.  Tales of the Waria follows four characters from this little-known community as they search for romance and companionship.  At times comical and at times heartbreaking, the film uncovers a world that not only defies our expectations of gender and Islam, but also reveals our endless capacity as human beings to search of love - whatever the consequences.

Kathy Huang first developed a passion for documentary filmmaking in the dusty fields of South Texas .  Inspired by her experiences teaching at-risk youth, she produced Scribble's Creations, a portrait of a teenager coming to age along the US-Mexico border.  Her subsequent works have continued to explore underrepresented communities confronting unique challenges.  Night Visions, a soldier's meditation on the Iraq War, screened at the Tribeca Film Festival and SILVERDOCS and received the War and Peace Awar from the Media That Matters Film Festival.  Miss Chinatown U.S.A., the story of a Chinese-American beauty contestant, also screened at Tribeca and aired on regional PBS stations.  Kathy recently completed her first feature documentary Tales of the Waria, in ITVS-funded project about a community of transgender women searching for love and intimacy in Indonesia.  The film will receive a national broadcast on PBS in spring 2012.